Netgenz - Science | Bonsai is not something foreign to us. This Japanese art dates back to the sixth era BC, leading to the tree being intentionally stunted to look like a miniature jungle.

When made correctly, bonsai has a high artistic value and is sold at a high price! With proper care, bonsai can live long. Even so, some reach several hundred years or more

Here are 7 Oldest Bonsai in the World

First of all, this is a Chabo-Hiba cypress bonsai which was originally a collection of Larz Anderson. He is a plant lover who serves as the US ambassador to Japan. In 1913, he brought home many bonsai to his country.

What is the special magnetism of Yamaki pine bonsai? None other than being able to survive after the Hiroshima bombing in 1945. Quoted by the National Bonsai Foundation (NBF), this 'magic' tree is in the garden of the late Masaru Yamaki, a bonsai expert.

This tree is almost 400 years old and the biggest obstacle is changing the pot. The soil is really dense which makes the water does not absorb and instead flow out of the soil surface. According to Michael James, curator of the museum, the effect is the lack of oxygen in the soil which can cause the roots to rot.

The meaning of the name is "Tokugawa pine 3rd generation". Its name comes from Tokugawa Iemitsu, who was so obsessed with preserving this bonsai that he belittled his work as a shogun (military ruler), sniping the Bonsai Tree Gardener.

It is estimated to be nearly 500 years old and is considered a national treasure of Japan. You can find this five-needle pine bonsai at the Tokyo Imperial Palace. Wanna see it someday?

Located in the Akao Herb and Rose Garden, it is believed to be the largest bonsai in the world. More than 16 feet (4.8 meters) high and more than 30 feet (9.1 meters) wide, Oldest quoted.

Why is it still classified as a bonsai, even though it is actually a giant? Apparently, it still meets the requirements, namely in the pot. In order not to collapse, this 600-year-old bonsai is supported with supports. 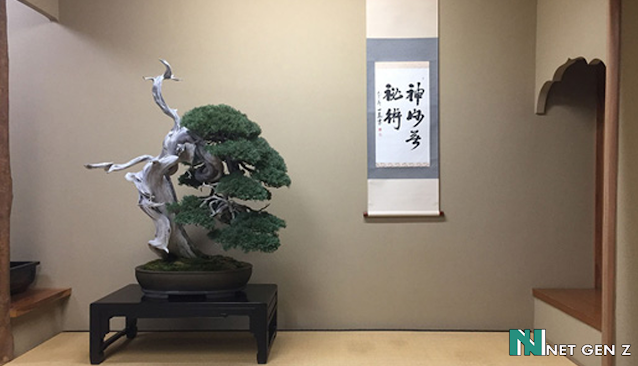 Shrunken as a bonsai garden and museum was built by Kunio Kobayashi, a bonsai master who has deepened his sector for more than 30 years. Inside, there is a pine bonsai that is almost 1,000 years old.

According to Bonsai Empire, this place is open every day except Monday. Visitors who want to enter must pay a fee of around 800 yen (Rp. 99 thousand). You can also buy bonsai for souvenirs!

Mansei-en Nursery has been open to the public since 1925. Unfortunately, because this park is private, visitors are not allowed to take pictures. Until the info is really lacking.

Who would have thought, the oldest bonsai in the world is not in Japan, but Italy? At the Crespi Bonsai Museum, there is a Ficus retusa Linn which is predicted to be 1,000 years old. As it turned out, Luigi Crespi (the founder of this place) spent 10 years getting ownership of the world's oldest bonsai from a Chinese master. His persistence paid off, he was successful in 1986!

The museum was built in 1991. After ownership was in hand, Luigi Crespi and Alberto Lavazza jointly looked after it. The bonsai was placed in a glass pagoda and became a special magnet for the museum, Oldest quoted.

Now you already know some of the oldest bonsai in the world which are spread in some countries. The patience of those who take care of it needs to be appreciated!

Read: 7 Geysers Facts, When Hot Water Spouts From the Ground