Netgenz - Science | As creatures who live on Earth, the funny thing is that humans know more about outer space than the oceans, which are called that side of the Earth. Yes, mankind has set foot several hundred thousand km away beyond Earth and studied many objects in outer space. Meanwhile, humans have never really explored the deepest boundaries of the ocean.

The ocean holds a lot of great mystique in its depths. While some of this mystery has been successfully solved by some researchers, there are still many unexplained riddles of the vast ocean that are still the subject of engaging dialogue and conversation. For example, many events and places in the ocean are mystical.

Here are the 7 Most Mysterious Places in the Ocean

The Mariana Trench is a marine environment that is little explored. By the way, this area has only been visited by 3 people: two oceanographers in 1960, and someone else is a filmmaker, his name is James Cameron in 2012

It's no surprise that this place isn't explored much. The problem is that the Mariana Trench is extremely dark and near freezing, with a strong pressure of eight tons per square inch, which makes it one of the most dangerous places on Earth. But somehow marine life can survive in this kind of excessive environment.

The Yonaguni Monument is a strange structure in the waters off the seas of Japan, which is called 'Japan's Atlantic'. This place has baffled researchers since it was first discovered by a diver in 1986.

To this day, researchers are still discussing whether this arrangement was man-made, an ancient pyramid sunk in an earthquake, or a natural rock scheme. , what are the signs that are in stone as face and animal carvings or naturally created strokes. Although still confusing, until now, Yonaguni Monument is a popular dive site among tourist groups.

3. Life under the Ross Ice Shelf

The Ross Ice Shelf is the largest ice sheet on Earth. Teams of researchers who study what lies beneath the ice sheet have uncovered some of the mystery collections of the species that live beneath it, such as fish and crustaceans.

It's still a mystery how the sea creatures got there and how they survive in such extreme conditions. Some believe this may have a considerable application to astrobiology, as researchers assume that Antarctica's ice structures have similar conditions to those of Europe, including Jupiter's moons, suggesting that terrestrial life could possibly survive in the coldest of environments.

Seamount leases were first investigated in detail in 2013 by a team of researchers from the University of Bristol. Rent as a seamount that sits on the surface of the Atlantic Ocean and is covered in an ecosystem rich in corals and sponges.

Currently, it is estimated that there are more than one million underwater volcanoes, many of which are still active, and are found in several hot spots around the world. Seamounts are one of the common marine ecosystems and attract a variety of fish, corals, and mammals.

Silfra is a sea in the middle of Iceland and is one of the places where you can swim between the two continents. Silfra is the straight face of Eurasia and North America, creating a gap with a depth of up to 63 meters. The Silfra Strait naturally increases in width by about 2 cm every year, which creates a conflict between the straight and the Earth.

Silfra water is claimed to be the clearest water on Earth, within visibility of up to 100 m. The water in Silfra is really clean because the glacial water has been filtered through the rock and has pores, it's even clean enough to drink. This makes Silfra a popular snorkeling and diving location. 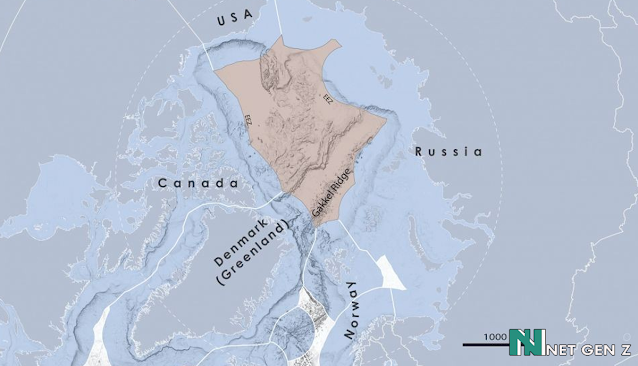 The Gakkel Ridge is the deepest mid-ocean ridge in the world, reaching depths of up to 4.8 km. Situated between Greenland and Siberia, the darkest corner of the Gakkel Ridge remains largely unexplored. However, in 2003, several researchers discovered the first Arctic hydrothermal circulation here.

Hydrothermal circulation is a hot spot for marine organisms, with a density of organisms up to 100 thousand times higher than the surrounding ocean. Chances are, the Gakkel Ridge contains species found nowhere else on planet Earth.

Some of the points that make up the Bermuda Triangle are Miami, Puerto Rico, and Bermuda. This area is recognized as the site of the unexplained disappearance of ships and planes. It's not clear why so many ships and planes have mysteriously disappeared here, but the chance of storms, rapid weather shifts due to the Gulf Stream, and the sheer number of islands in the Caribbean make navigation difficult.

In addition, the National Oceanic and Atmospheric Administration (NOAA) admitted that the area could possibly mess up navigation tools, causing compasses to point to the wrong north. Despite all the mysterious events that occur in the Bermuda Triangle, there is no evidence that the Young Triangle is riskier than anywhere else on Earth.

Read: 5 Mysteries of the Ocean that Science is Trying to Solve