Netgenz - Science | Not only studded with stars, the night sky in the northern and southern hemispheres always has a certain charm. Starting from the beautiful aurora that is eye-catching, to several pillars of light that cut the night sky beautifully.

If you often watch science fiction films, at first glance, the pillars of light certainly look like some spotlights from an alien planet. Actually, was it a natural event of the light pillar?

Read Also: 7 Oldest Lakes in the World and Their Depths

Here are 5 Facts about Light Pillar

To some, the event of a pillar of light may sound foreign. Although the name is not as famous as the aurora borealis and australis, the light pillar event is actually an optical event that usually occurs in the coldest areas, of course at night, or near night.

The pillars of light are often found in the polar regions, either the south pole or the north pole. In winter and autumn, some areas close to the poles such as Canada, Finland, and their surroundings are often the right spots for the appearance of pillars of light. For example, like the photo above, you can see the beauty of the pillars of light in the Alaskan sky.

2. Caused by an optical illusion

Compared to natural events, light pillars are actually more fitting to be described as optical events. Pillars of light are created during extreme cold and dry conditions when light reflects off ice crystals in Earth's atmosphere. The rays that hit the ice crystals are then reflected back to make the same plate line as the pillars in the sky. The height of the pillar of light depends on the shape of the ice crystals that reflect the light.

The source of light that will be reflected by these ice crystals can be of various kinds. It can come from the reflection of moonlight or some other light source above the Earth, for example, some street lamps. In New York, the pillar of light was deliberately created to commemorate the events of 9/11 that occurred at the WTC, called the Tribute to Light.

Read: 7 Geysers Facts, When Hot Water Spouts From the Ground

3. During the day, this phenomenon is called the 'sun pillar'

If the light pillar is the same as night, the sun pillar is a call for the pillars of light that exist during the day. Actually, the process is the same too, the difference is that a sun pillar is an optical event that is formed due to reflections between sunlight and ice crystals in Earth's atmosphere.

Light pillars and sun pillars still count as 'halo' events, whether there are ice crystals or light, which compares only to how the trick is reflected. According to Science Alert, the light pillar event is still in the same family as the sundogs event, aka the sun halo, which is familiar to some people.

4. Apparently, pillars of light have occurred in tropical countries

In 2019, the pillar of light seems to have existed in a neighboring country, namely in Sulu Province, Philippines. Some of the pillars of green light are called 'lansuk-lansuk' by local people. Quoted from Dailypedia, Raymond Ordinario explained that the pillars of light in Sulu's sky were created because cirrus clouds containing several grains of ice crystals reflected the moon's rays.

Apart from that in tropical countries, citing ScienceABC, the pillars of light were also observed in Iran, you know. This event is actually not surprising, considering that the area around the desert generally has an extreme reduction in temperature at night, allowing for pillars of light to appear. 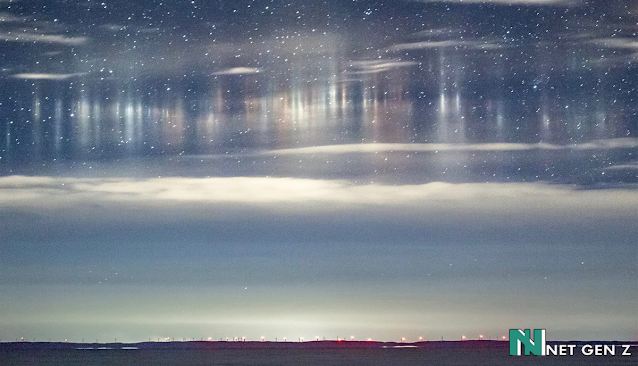 Watching some of the photos above, you will know that the pillars of light have quite a variety of colors. Apparently, some of the colors we can see in the light pillars depend on the color of the light source.

Just as flicked above, ice crystals reflect light from the Moon or street lamps, as well as color. The height and brightness of the light affect the color that will appear from the reflection of some ice crystal grains. So, it is not surprising that we can see various colors in a photo of a pillar of light.

Interesting, right? Just like any other event, it takes the right moment and extra luck to see the pillar of direct light. Although the chance of a pillar of light in Indonesia is very small, even almost impossible, at least you don't need to be surprised when one day you see some beautiful pillars of light in the night sky.