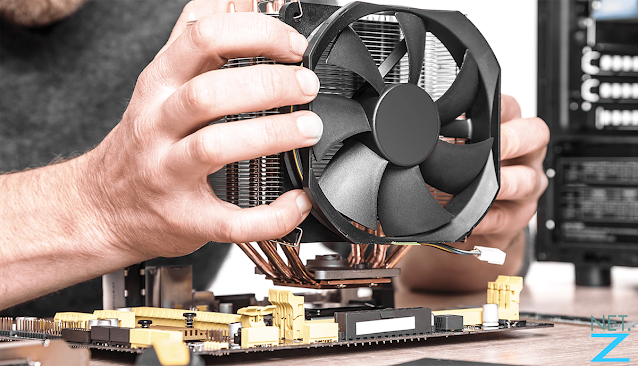 One of the problems with computers is that almost all components in the CPU (processor, motherboard, VGA, hard drive, and others) generate heat. Relatively high temperatures will result in shortening the life of computer peripherals, even making the system unstable. Manufacturers minimize heat by reducing the size of semiconductor cores for processors, chipsets, and other peripherals. In fact, currently, a processor already has a TDP (Thermal Design Power or Thermal Design Point) feature on the INTEL processor and Cool'n Quite on the AMD processor to overcome the heat generated.

Some of the disadvantages of air conditioning systems are:

Currently, copper is widely used as a heat absorber in collaboration with aluminum as a heat dissipator and heat pipes to flow and large diameter fans to reduce noise. The shape and basic materials of heatsinks vary, there are full copper, nickel-plated copper, a combination of copper and aluminum.

The quality of a heatsink is determined by several factors:

The performance of a cooling system is rated in °C/W (or K/W) C here is Celsius and K is Kelvin. For example, if a peripheral is powered by 20 W, and the temperature increase is 10°C, then the cooling rate of the system is 10°C/20 W or 0.5°C/W.

The fan/tire is jammed because the cable/lubricant in the fan bed is dry. The solution: Remove the rubber and bearing cover sticker on the back of the fan.

Apply oil/oil to the fan/fan bearings while the fan blade is rotated slowly so that the oil/oil is absorbed when finished cover it again with rubber and a sticker.

This can cause the computer to shut down suddenly because the bios on the motherboard detect an excess temperature so that it runs the command temperature protection.

Search and solve on video and soundcards as well as storage media, power supply, and cooling systems on computers. It is an activity to identify and analyze a malfunction in these components. The procedure in this learning activity is a general procedure that can be applied in overcoming a problem in the computer.