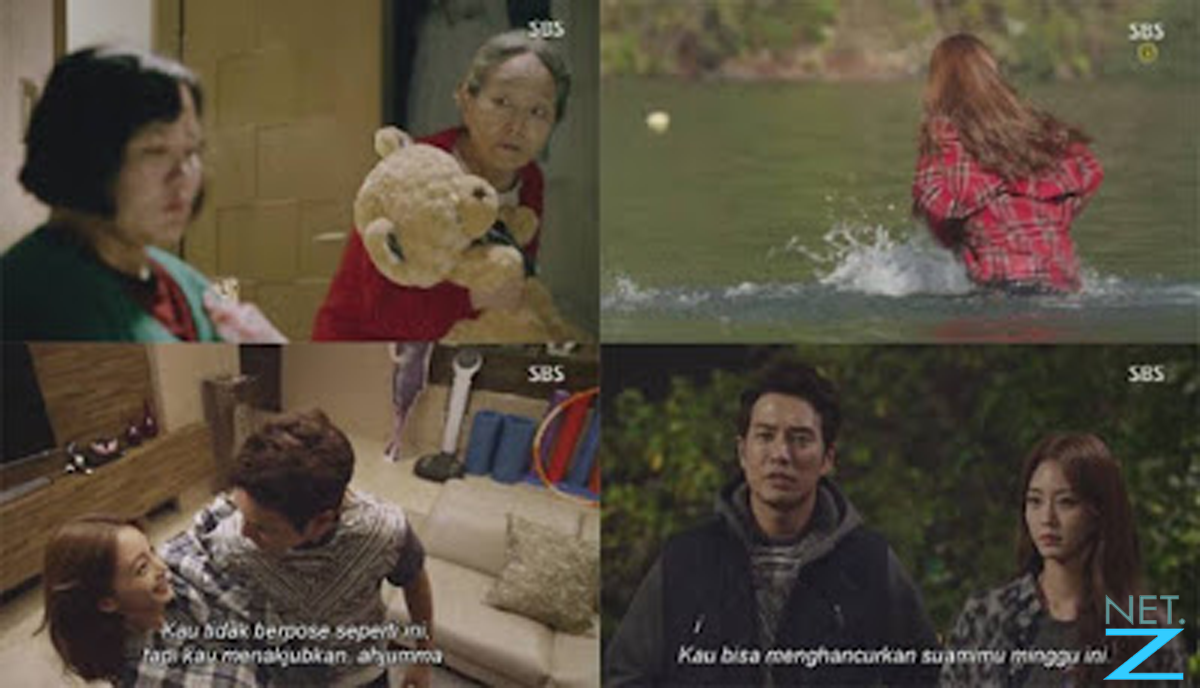 "Oh sorry" Geum replied as he handed her the bracelet.

The two of them warmed up by making hot tea on the river bank.
The doctor muttered to himself.

“How did you destroy all these preparations?”

"I also have a grandmother, she has dementia. But I take care of it. Because he is so special to me.” Answer geum

"I'm sorry I startled you," said Geum while turning badam

"Sarah. What kind of person are you? You are a beautiful person. You donated $100,000 with no strings attached. It was incredible". Lee said

“At the party, fishing. And take the bracelet. All three are different. But they have something in common.” Lee continued

“What is it?” asked Geum

"I feel very warm here, can I meet you this time one more time??" Lee replied

They both smiled and then went back to their respective homes

Once at home Geum and the doctor celebrate their success by dancing.

“You don't pose like this, but you're amazing, ahjumma.. you managed a touchless date. Very good," said the doctor

"I'm still shaking, I can't believe it. He looked at me. My heart is still pounding..” Geum replied

After a few conversations passed. Sidoctor praises Geum. He said she was beautiful.. very beautiful.. the doctor's face was red. Then they made plans for a date because the date was this week. The doctor said he had to seduce Lee affectionately. For Chae Yein and reporters to see it, HBS CEO Lee Kang Joon was ambiguous and he also dumped his ex-wife. There will be a scandal. That way Lee Kang Joon will be destroyed and they will succeed in taking revenge.

"Finally we made it..." said the doctor.

"Why?" asked the doctor

"It is alright. I want to find the wind" he answered

Then he went out alone but the doctor followed him and said.

“You can destroy your husband this week… why with your expression. Tell me" the doctor asked

"Because I want to be his wife again, I want to be their daughter-in-law, not Gyo Chae Yeon." Answer geum
The doctor laughs at his words Geum

“I must have lost my hearing. All I heard earlier was a buzz." Say it

"You never look in the mirror? You know how beautiful you are. With your beauty.. you want to be their daughter-in-law again? You can be in a relationship with any man. Why should it be her?" ask her
"He's the only man I swear to grow old with. If I marry my husband and marry him, Gyo Chae will be alone. You can take him back. The problem is finished !" replied Geum 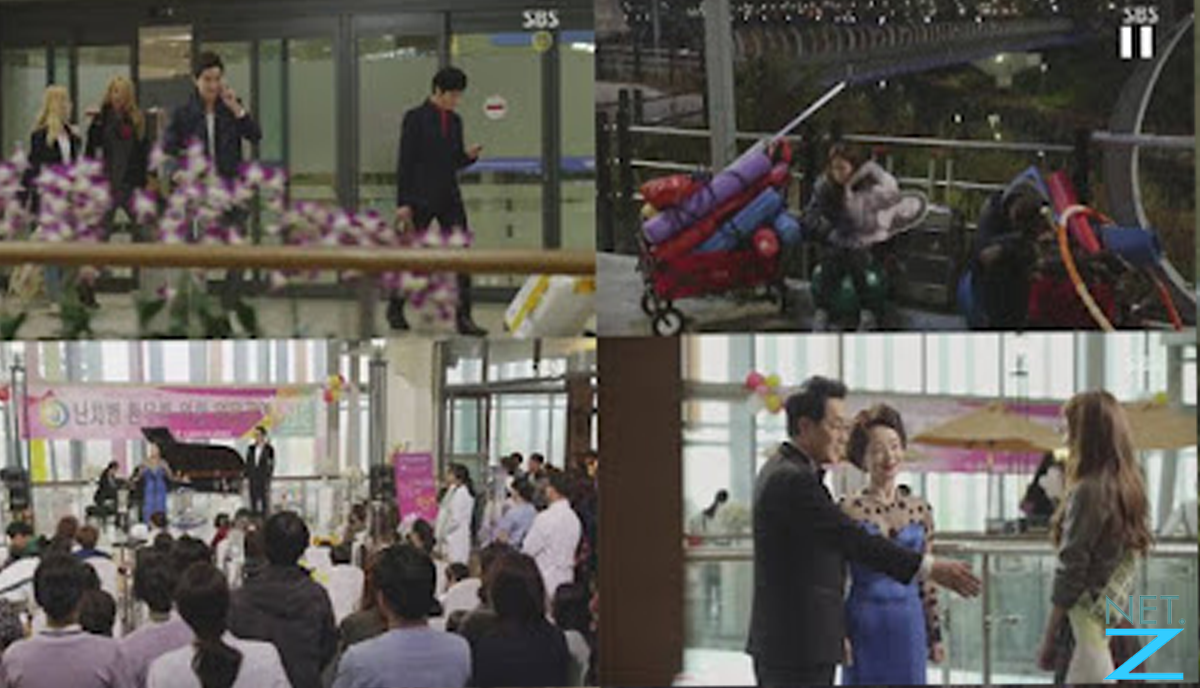 Then she gets a call from Ji Hoon. That is the doctor's sister.. she's a real doctor, I think...

Said he was back. He's already at the airport.

"What are you doing? Who will come?” ask Geum

"This isn't your house?" ask Geum

"What is this? You're not a doctor and this isn't your home either?

“shut up and pack up”

Then the elders also cleaned their belongings. And go from there. Now they are sitting on the side of the road together. With the things they brought
On the way, Geum was teased by people in cars. He asked if he needed a ride or not. Geum replied No. Then the man left.

"A young man like him likes you too.. do you still want to go back to your in-laws??" ask the doctor
"Okay, do as you please.. all I need is Lee and Chae's marriage to be canceled.." he said
Then the doctor told Geum to stand up.
"Why," asked Geum.

"Said you want to go back to your mother-in-law" replied the doctor
Then the two of them went for a walk to a house not far from their parents-in-law... I think they had a contract... Didn't the doctor say that his son was the Winner of the group? When you don't have a house.. :v

Elsewhere, Geum's mother-in-law is singing together on stage. I don't know what they sing. What is clear is not the Sambalado song... :3

But the pianist coughed and disturbed their concentration...

And unexpectedly there was Geum who replaced the coughing pianist. And make the music back to normal... He plays really well.. so want to sing along.. :v

At the end of the song, his mother-in-law gave a toast. And when they're done, they thank you for the help. He said that if he didn't help everything would be messed up

They chat for a while and Geum again changes her name to Sara.

Lee's mother praises Sara for being good at playing the piano. And be polite. And Lee's parents want to see Sara again. Said they'd be here until the weekend.

In the office, Lee is holding his Grandmother's Bracelet. And remembers Geum's words that he also has a grandmother. And remembering the events of the previous fishing trip. Soon Chae came to give his work schedule this afternoon. Because he saw Lee daydreaming Chae asked Lee to drink coffee outside. But Lee didn't care. And make Chae feel weird...

but not long ago Young's father came home

"What's wrong, why are you outside?"

"You killed him? He just moved here" replied Youn

Then Lee's mother left because Young didn't come in. After outside he met with Geum...

The four of them simultaneously smiled at each other...

Then the Lee Family entered the house and talked about Sara...

“The young lady who helped out at our show turned out to be a neighbor. It's destiny. Interesting” said his father Lee

"Try asking the young lady who is playing the piano instrument for us to start now," said Lee's mother
"Good idea.." replied his father

"Yes, it seems he has lived abroad. He also attended your HBS charity event” said his father

“She is very beautiful and the appearance of her figure is also very amazing. She's slim but has curves. Her figure is really amazing.." said his sister Lee...

Their conversation ended and Lee went to his room. And try to call Sara...

"I heard that you just moved near my house... The white house you visited is my house" Lee said on the phone

"How could this happen? Amazing...” Geum replied

"I know we're going to have dinner this weekend. But since we're neighbors.. may I meet you? Ask Lee...

After a while the call between Lee and Geum. Chae is also called LEE. But left it unpicked
In voicemail. He says...

"Aren't you home? I'm going to your house.. I also have opera tickets that your parents like..”.
Geum is waiting for Lee in the park.. Lee finally comes and makes Geum happy...

They talked about terms that basically Lee missed Sara. And he's the only one on her mind
Lee is really unstable... -_-

“I want to meet you,” Lee said to Geum Ran

But soon Chae who saw the two of them in the park rushed out of the car and watched them. Chae remembered that the woman was a woman who donated $100,000 at a charity event.
Sara looked at Chae like she wanted to hurt Chae's heart on purpose...
And episode 2 ends...